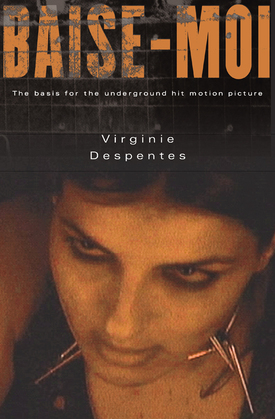 “A sticky, smashed, sweaty, laughing too loud, broken teeth, drunker than drunk adventure” from the filmmaker and author of the Vernon Subutex novels (Bust Magazine).

Baise-Moi is one of the most controversial French novels of recent years, a punk fantasy that takes female rage to its outer limits. The basis for a hit underground film which was banned in France, Baise-Moi is a searing story of two women on a rampage that is part Thelma and Louise, part Viking conquest.

Manu and Nadine have had all they can take. Manu has been brutally raped and determines it's not worth leaving anything precious lying vulnerable—including her very self. She teams up with Nadine, a nihilist who watches pornography incessantly, and they enact their own version of les vols et les viols (rape and pillage)—they lure men sexually, use them up, then rob and kill them. Drawing from the spiky cadences of the Sex Pistols and the murderous eroticism of Georges Bataille or Dennis Cooper, Baise-Moi is a shocking, accomplished, and truly unforgettable novel.


“An underground favorite that will be talked about for years.”—Female FYI