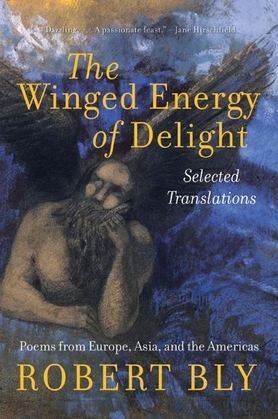 The Winged Energy of Delight

Robert Bly has always been amazingly prescient in his choice of poets to translate. The poetry he chose supplied qualities that were lacking from the literary culture of this country. For the first time Robert Bly’s brilliant translations, from several languages, have been brought together in one book. Here, in The Winged Energy of Delight, the poems of twenty-two poets, some renowned, others lesser known, are brought together.

At a time when editors and readers knew only Eliot and Pound, Robert Bly introduced the earthy wildness of Pablo Neruda and Cesar Vallejo and the sober grief of Trakl, as well as the elegance of Jiménez and Tranströmer. He also published high-spirited versions of Kabir and Rumi, and Mirabai, which had considerable influence on the wide culture of the 1970s and 1980s. Bly’s clear translations of Rilke attracted many new readers to the poet, and his versions of Machado have become models of silence and depth. He continues to bring fresh and amazing poets into English, most recently Rolf Jacobsen, Miguel Hernandez, Francis Ponge, and the ninteenth-century Indian poet Ghalib. As Kenneth Rexroth has said, Robert Bly “is one of the leaders of a poetic revival which has returned American literature to the world community.”