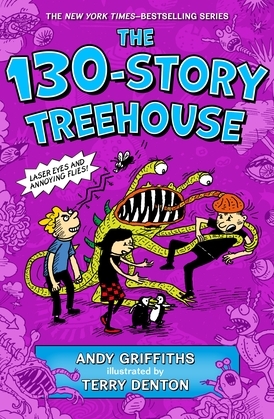 Andy and Terry live in a 130-story treehouse. (It used to be a 117-story treehouse, but they added another 13 stories.) It has a soap bubble blaster, a time-wasting level, a 13-story igloo, the GRABINATOR (it can grab anything from anywhere at any time), a toilet paper factory, and an extraterrestrial observation centre for observing aliens.

As it turns out, though, it?s Andy, Terry and Jill who are being observed?and then abducted?by a giant flying eyeball from outer space! At first they're excited to be going on an intergalactic space adventure, but when they arrive on Planet Eyeballia, they discover it's not at all a friendly place. Will the gang be able to escape and get back to Earth and write their book before time runs out?

Praise for Andy Griffiths and the Treehouse series:

"Will appeal to fans of Jeff Kinney and Dav Pilkey. . . . The wonderfully random slapstick humor is tailor-made for reluctant readers. . . . A treat for all." ?Booklist on The 13-Story Treehouse