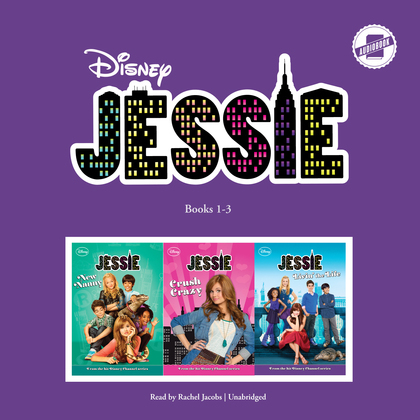 Jessie, a starry-eyed girl from rural Texas, moves to New York City and soon finds herself living in a multi-million dollar penthouse as the nanny to four children and a seven-foot pet lizard. With Jessie?s help, this incredibly loving family stays connected and close. This collection contains all three books in the Jessie series!

When Jessie becomes the nanny to a high-profile couple?s four kids, she has her work cut out for her. Emma, Luke, Ravi, and Zuri can?t seem to agree on anything! Will Jessie convince the family to get along? Or will the hired nanny become the fired nanny? Then, just when Jessie thinks life will get easier, it?s back-to-school blues for the kids?and homework isn?t their only problem! Can Jessie help them pass with flying colors?

When Jessie learns that Connie is Luke?s secret admirer, Jessie invites her to become Luke?s new study buddy. But Jessie soon realizes that Connie is more than an admirer?she?s a full-blown creeper! Will Jessie and Luke be able to shake her off, or will Connie refuse to take no for an answer? Then, when Tony asks Jessie to a special dinner, she is terrified he will propose! Will Jessie end their relationship? Or will she and Tony live unhappily ever after?

While Jessie is helping Zuri take care of Lucy, the classroom bunny, Lucy goes missing! Will Jessie track down the runaway rabbit before Zuri realizes Lucy escaped? Then, in an attempt to help Zuri succeed in school, Jessie shows her the importance of winning over her teacher, Mrs. Falkenberg. But instead of impressing her, Jessie ends up with her name on the Naughty Board! Will Jessie go right from teacher?s pest to teacher?s pet? Or will the Naughty Board prevail?