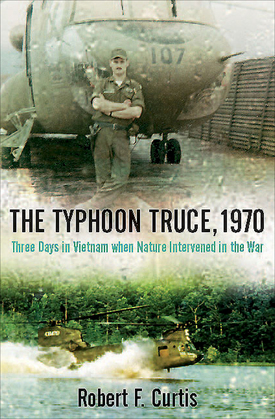 This military history chronicles a time during the Vietnam War when fighting stopped and the 101st Airborne helped those in need during a natural disaster.

For three days during the Vietnam War, it wasn’t rockets or artillery that came through the skies, but a horrific force of nature that suddenly put both sides in awe. When Super Typhoon Joan arrived in October 1970, an unofficial truce began. Air crewman faced masses of Vietnamese civilians outside their base perimeters for the first time. Could we trust them not to shoot? Could they trust us not to drop them off in a detention camp? Truces never last, but while they do, life changes for everyone involved.

The “typhoon truce” stopped the war for three days in northern I Corps—that area bordering the demilitarized zone separating South Vietnam from North. Then, less than a week later, Super Typhoon Kate hit the same area with renewed fury. As the entire countryside was flooded, the people faced war and natural disaster at the same time.

No one but the Americans had the resources to help the people who lived in the lowlands, and so they did. The everyday dangers they faced were only magnified by low clouds and poor visibility. But the aircrews of the 101st Airborne went out to help anyway. In this book, we see how, for a brief period during an otherwise vicious war, saving life took precedence over bloody conflict.