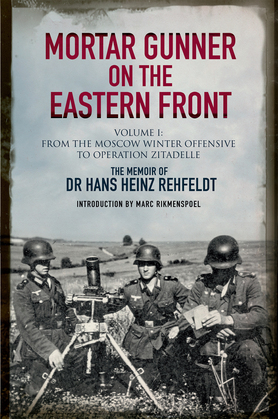 Mortar Gunner on the Eastern Front Volume I

The first volume of the World War II diaries of Nazi mortar gunner constantly pushed to the brink of death while fighting against Russia.

Following his Abitur (A-levels) in 1940, Hans Heinz Rehfeldt volunteered for Germany’s Panzer Arm but was trained on the heavy mortar and heavy MG with Grossdeutschland Division.

In 1941, he was on the Front fighting for the city of Tula, south of Moscow. Battling in freezing conditions without winter clothes, they resorted to using those taken from Soviet corpses. In 1942, his battalion fought near Oriel, suffered heavy losses, and disbanded. Ill with frostbitten legs, Rehfeldt was treated in hospital, and once recovered, was dispatched back to the Front.

Following various battles (Werch, Bolchov) his battalion again suffered heavy losses and it merged. In agony from severe frostbite to his legs, Rehfeldt defied the odds and astonished his surgeon when he walked again. He was promoted from Gunner to Trained Private Soldier in 1942, and to Corporal for bravery in the field in 1943. He was also awarded numerous honors, including the Wound Badge and the Infantry Assault Badge.

On 3 May 1945, he was captured by U.S. Forces and held as a POW for one month in a camp at Waschow before internment in Holstein where he was released in July 1945, after agreeing to work on the land.

Then, in December 1945, he put his past behind him and began studying for his future career: veterinary medicine.