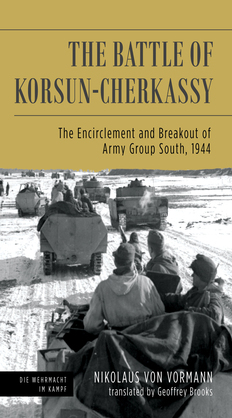 A primary source account of the WWII Battle of Korsun-Cherkassy written by a Nazi commander who survived the Soviet victory.

In 1943, the tide began to turn against Germany on the Eastern Front. Their summer offensive, Operation Citadel, was a failure. The Red Army’s Dnieper-Carpathian Offensive was pushing back on Germany’s Army Group South in a war of attrition. By October, Kiev was liberated, and the Soviets had reached the Dnieper River in Ukraine.

After sudden attacks by the 1st and 2nd Ukrainian Fronts, the Russians achieved a major encirclement of six German divisions, a total of 60,000 soldiers, in a pocket near the Dnieper River. A dramatic weeks-long battle ensued. After a failed attempt led by Erich von Manstein to break into the pocket from the outside, the trapped German forces focused their efforts on escape. Abandoning equipment and wounded soldiers, the survivors rejoined the surrounding panzer divisions.

Beginning with the German retreat to the Dnieper in 1943, Generalleutnant von Vormann chronicles the battle and describes the psychological effects of the brutal combat. As one of the few primary source materials that exists on the subject, this volume is of significant historical interest.