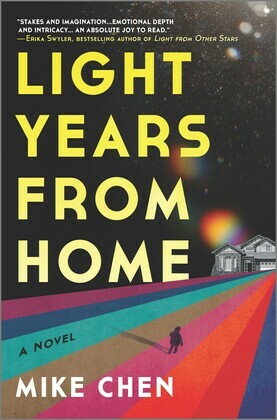 A Novel
by Mike Chen (Author)
Excerpt
Fiction Science fiction Space opera and planet opera Action & adventure
warning_amber
One or more licenses for this book have been acquired by your organisation details
EPUB
26 loans, One at a time
Details

A Best Of pick and Most Anticipated Sci Fi and Fantasy novel, as selected by Goodreads • Buzzfeed • BookRiot • The Portalist • IO9 • BookBub • SheReads • BiblioLifestyle • Den of Geek • GeekDad

Every family has issues. Most can’t blame them on extraterrestrials.

Evie Shao and her sister, Kass, aren’t on speaking terms. Fifteen years ago on a family camping trip, their father and brother vanished. Their dad turned up days later, dehydrated and confused—and convinced he'd been abducted by aliens. Their brother, Jakob, remained missing. The women dealt with it very differently. Kass, suspecting her college-dropout twin simply ran off, became the rock of the family. Evie traded academics to pursue alien conspiracy theories, always looking for Jakob.

When Evie's UFO network uncovers a new event, she goes to investigate. And discovers Jakob is back. He's different—older, stranger, and talking of an intergalactic war—but the tensions between the siblings haven't changed at all. If the family is going to come together to help Jakob, then Kass and Evie are going to have to fix their issues, and fast. Because the FBI is after Jakob, and if their brother is telling the truth, possibly an entire space armada, too.

The perfect combination of action, imagination and heart, Light Years from Home is a touching drama about a challenge as difficult as saving the galaxy: making peace with your family…and yourself.

"With heart and insight...Chen crosses the stakes and imagination of a space opera with the emotional depth and intricacy of a family drama." —Erika Swyler, bestselling author of Light from Other Stars