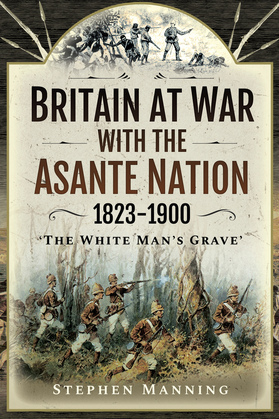 Britain fought three major wars, and two minor ones, with the Asante people of West Africa in the nineteenth century. Only the Sudanese and Zulu campaigns saw a greater loss of life, both for the British and the indigenous population. Like the Zulus, the Asante were a warrior nation who offered a tough adversary for the British regulars – they were respected for their martial skills and bravery. And yet these wars have rarely been written about and are little understood. That is why Stephen Manning’s vivid, detailed new history of this neglected colonial conflict is of such value.

In the war of 1823-6 the British were defeated – the British governor’s head was severed and his skull was taken to the Asante king who made a cast of gold and this trophy was paraded once a year during an Asante ceremony. The years 1873-4 witnessed the brilliance of Sir Garnet Wolseley in overcoming the logistical problems of sending a large British expedition deep into the jungle where it faced not only a formidable foe but a climate so unforgiving that the region became known as ‘The White Man’s Grave’. Finally, the 1900 campaign culminated in the epic siege of the British fort in Kumasi which must rank as one of the great Victorian escapades alongside the more famous sieges of Peking and Mafikeng.

Stephen Manning’s account, which is based on Asante as well as British sources, offers a fascinating view from both sides of one of the most remarkable and protracted struggles of the colonial era.