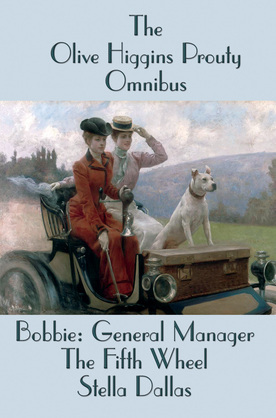 From the author of Now, Voyager. Included in this mammoth omnibus edition are Bobbie: General Manager, The Fifth Wheel, and Stella Dallas. This book will quickly become one of your favorites and provide you with hours and hours of reading enjoyment.Bobbie: General Manager is a perfectly enjoyable glimpse into the life of an upper middle-class teen age girl whose family has begun to struggle during the Gilded Age. At once funny, honest, and very well written. The Fifth Wheel follows Bobbie?s sister Ruth as she navigates her way into young adulthood. Faced with the usual life choices of a young women of her time in her place she finds herself questioning the options she has and not wanting to be little more than a fifth wheel in her own life.Stella Dallas a pretty working class girl decides she wants more out of life than drudgery and work. She sets her sights on marry rich and she manages it. But she soon finds that marrying a rich man and keeping him are not the same things. Course and vulgar by upper class standards she is unable to bridge the cultural divide that separates them. When Stella and her husband inevitably divorce she shifts her ambitions to her daughter. But can she be any more successful at helping her daughter fit into that world than she was herself? Stella Dallas has captivated audiences since it first appeared. It has been successfully adapted three times for the screen and once as a radio play and is credited with creating the modern soap opera. Barbara Stanwyck garnered an Oscar nomination for playing the title role.