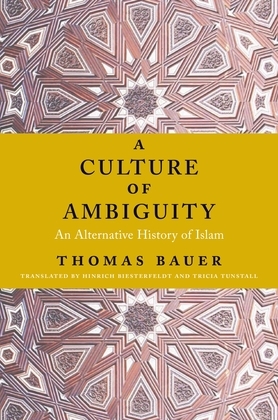 A Culture of Ambiguity

In the Western imagination, Islamic cultures are dominated by dogmatic religious norms that permit no nuance. Those fighting such stereotypes have countered with a portrait of Islam’s medieval “Golden Age,” marked by rationality, tolerance, and even proto-secularism. How can we understand Islamic history, culture, and thought beyond this dichotomy?

In this magisterial cultural and intellectual history, Thomas Bauer reconsiders classical and modern Islam by tracing differing attitudes toward ambiguity. Over a span of many centuries, he explores the tension between one strand that aspires to annihilate all uncertainties and establish absolute, uncontestable truths and another, competing tendency that looks for ways to live with ambiguity and accept complexity. Bauer ranges across cultural and linguistic ambiguities, considering premodern Islamic textual and cultural forms from law to Quranic exegesis to literary genres alongside attitudes toward religious minorities and foreigners. He emphasizes the relative absence of conflict between religious and secular discourses in classical Islamic culture, which stands in striking contrast to both present-day fundamentalism and much of European history. Bauer shows how Islam’s encounter with the modern West and its demand for certainty helped bring about both Islamicist and secular liberal ideologies that in their own ways rejected ambiguity—and therefore also their own cultural traditions.

Awarded the prestigious Leibniz Prize, A Culture of Ambiguity not only reframes a vast range of Islamic history but also offers an interdisciplinary model for investigating the tolerance of ambiguity across cultures and eras.