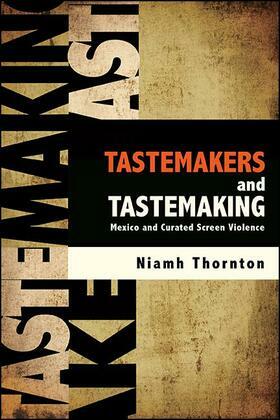 Considers how and why taste persists in the analysis of Mexican film and television by looking at key figures and their impact on the curation of violence.

Tastemakers and Tastemaking develops a new approach to analyzing violence in Mexican films and television by examining the curation of violence in relation to three key moments: the decade-long centennial commemoration of the Mexican Revolution launched in 2010; the assaults and murders of women in Northern Mexico since the late 1990s; and the havoc wreaked by the illegal drug trade since the early 2000s. Niamh Thornton considers how violence is created, mediated, selected, or categorized by tastemakers, through the strategic choices made by institutions, filmmakers, actors, and critics. Challenging assumptions about whose and what kind of work merit attention and traversing normative boundaries between ?good? and ?bad? taste, Thornton draws attention to the role of tastemaking in both ?high? and ?low? media, including film cycles and festivals, adaptations of Mariano Azuela?s 1915 novel, Los de Abajo, Amat Escalante?s hyperrealist art films, and female stars of recent genre films and the telenovela, La reina del sur. Making extensive use of videographic criticism, Thornton pays particularly close attention to the gendered dimensions of violence, both on and off screen.

Niamh Thornton is a Reader in Latin American Studies at the University of Liverpool, United Kingdom. She is the author and editor of several books, including iRevolution and Rebellion in Mexican Film/i and iInternational Perspectives on Chicana/o Studies: This World is My Place (coedited with Catherine Leen).