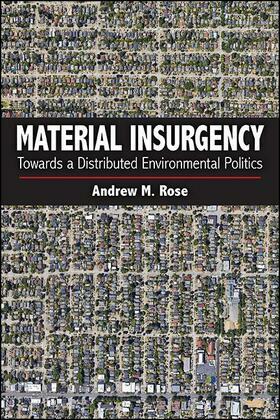 In Material Insurgency, Andrew M. Rose examines emerging new materialist and posthuman conceptions of subjectivity and agency and explores their increasing significance for contemporary climate change environmentalism. Working at the intersection of material ecocriticism, posthuman theory, and environmental political theory, Rose critically focuses on the ways social movement organizing might effectively operate within the context of distributed agency. This concept undoes the privileging of rational human actors to suggest agency is better understood as a complex mixture of human and nonhuman forces. Rose explores various representations of distributed agency, from the pipeline politics of the Keystone XL campaign to the speculative literary fiction of Leslie Marmon Silko and Kim Stanley Robinson. Each of these cultural and literary texts provides a window into the possible constitution of a (distributed) environmental politics that does not yet exist and operates as a resource for envisioning environmental actors we cannot necessarily study empirically, because they are still only a prospect, or potential, of our imagination.