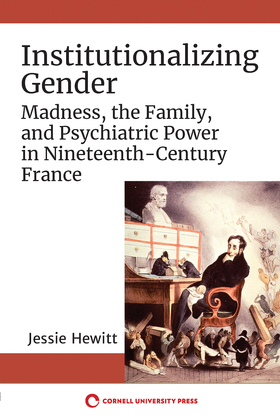 Institutionalizing Gender analyzes the relationship between class, gender, and psychiatry in France from 1789 to 1900, an era noteworthy for the creation of the psychiatric profession, the development of a national asylum system, and the spread of bourgeois gender values.

Asylum doctors in nineteenth-century France promoted the notion that manliness was synonymous with rationality, using this "fact" to pathologize non-normative behaviors and confine people who did not embody mainstream gender expectations to asylums. And yet, this gendering of rationality also had the power to upset prevailing dynamics between men and women. Jessie Hewitt argues that the ways that doctors used dominant gender values to find "cures" for madness inadvertently undermined both medical and masculine power—in large part because the performance of gender, as a pathway to health, had to be taught; it was not inherent. Institutionalizing Gender examines a series of controversies and clinical contexts where doctors' ideas about gender and class simultaneously legitimated authority and revealed unexpected opportunities for resistance.

Thanks to generous funding from the Andrew W. Mellon Foundation, through The Sustainable History Monograph Pilot, the ebook editions of this book are available as Open Access volumes from Cornell Open (cornellopen.org) and other repositories.