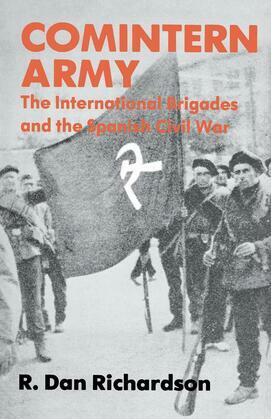 The International Brigades and the Spanish Civil War
by R. Dan Richardson (Author)
Excerpt
Nonfiction History History by country United States Other Military Europe Spain  1945-1989
warning_amber
One or more licenses for this book have been acquired by your organisation details
EPUB
Unlimited loans, One at a time
Details

When Spain exploded into civil war in July 1936, a conflict whose roots were deep in the Spanish past became the arena for the violent political passions that divided Europe north of the Pyrenees. Germany, Italy, and the Soviet Union intervened actively in the war, using Spain as a testing ground for their military equipment and techniques and their political ideologies.

In this first in-depth study of the politics of the International Brigades in the Spanish Civil War, R. Dan Richardson views the Brigades in the wider context of both the complex political-military alignments of Loyalist Spain and the broader Soviet-Comintern strategy during the Popular Front era. While not denying the generous impulse that led many young men the world over to enlist in the cause of the Spanish Republic, he sees the Brigades primarily as instruments of communist policy. He argues that the directing force behind the enlistment, training, and deployment of the Brigades was the international communist organization—a compelling example of how the ends of propaganda and politics took precedence over military objectives.

Using a wide array of sources in English, Spanish, French, Italian, and German, and a thorough analysis of the Brigades' own voluminous literary output, Richardson clearly shows that the Brigades were a significant political, ideological, and propaganda instrument, which was used effectively by the Comintern for its own purposes, not only in Spain but on the larger world stage.