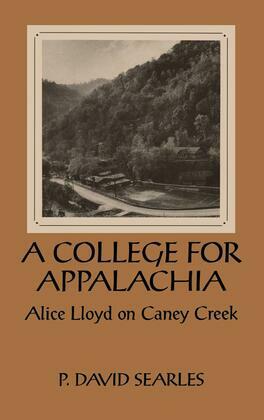 A College For Appalachia

Alice Spencer Geddes Lloyd was a New England woman with a mission in life. In 1916 she settled on Caney Creek in Eastern Kentucky, determined to bring higher education to this remote corner of Appalachia. The school she founded, now Alice Lloyd College, continues to serve the area and its people and to stand as a tribute to Lloyd's remarkable energy, determination, and vision.

Lloyd's program combined a rigorous academic curriculum with an intense effort to instill a sense of service in the school's graduates. This education was provided free and required only that the students abide by Lloyd's strict rules of conduct and pledge to remain in the mountains after graduating.

In the first full-scale study of Lloyd's life and work and the institution she founded, David Searles shows how this courageous and complex woman struggled throughout her long life against seemingly insurmountable odds to create an institution dedicated to improving life in Appalachia. But, as he acknowledges, Lloyd's fundraising activities relied on harmful stereotypes that caused resentment among her mountain neighbors, and she often angered others working in the mountains.

Despite the negative aspects of Lloyd's activities, Searles casts serious doubt on the now fashionable conclusion that the women who came to the mountains to do good created more problems than they solved. Lloyd's story, he argues, demonstrates that much good was indeed accomplished and that the people of the mountains recognized and appreciated her achievement.