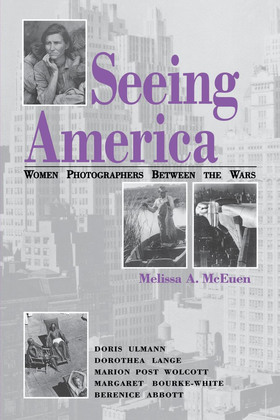 Seeing America explores the camera work of five women who directed their visions toward influencing social policy and cultural theory. Taken together, they visually articulated the essential ideas occupying the American consciousness in the years between the world wars.

Melissa McEuen examines the work of Doris Ulmann, who made portraits of celebrated artists in urban areas and lesser-known craftspeople in rural places; Dorothea Lange, who magnified human dignity in the midst of poverty and unemployment; Marion Post Wolcott, a steadfast believer in collective strength as the antidote to social ills and the best defense against future challenges; Margaret Bourke-White, who applied avant-garde advertising techniques in her exploration of the human condition; and Berenice Abbott, a devoted observer of the continuous motion and chaotic energy that characterized the modern cityscape.

Combining feminist biography with analysis of visual texts, McEuen considers the various prisms though which each woman saw and revealed America. Their documentary photographs were the result of personal visions that had been formed by experiences and emotions as well as by careful calculations and technological processes. These photographers captured the astounding variety of occupations, values, and leisure activities that shaped the nation, and their photographs illuminate the intricate workings of American culture in the 1920s and 1930s.