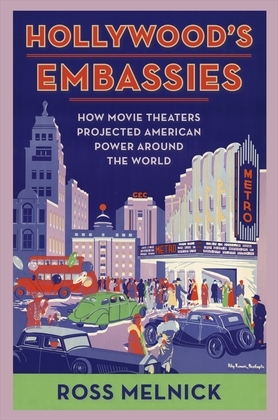 How Movie Theaters Projected American Power Around the World
by Ross Melnick (Author)
Excerpt
Nonfiction Arts Film & video History & criticism History 1945-1989 History by country United States
warning_amber
One or more licenses for this book have been acquired by your organisation details
EPUB
Unlimited loans, One at a time
Details

Beginning in the 1920s, audiences around the globe were seduced not only by Hollywood films but also by lavish movie theaters that were owned and operated by the major American film companies. These theaters aimed to provide a quintessentially “American” experience. Outfitted with American technology and accoutrements, they allowed local audiences to watch American films in an American-owned cinema in a distinctly American way.

In a history that stretches from Buenos Aires and Tokyo to Johannesburg and Cairo, Ross Melnick considers these movie houses as cultural embassies. He examines how the exhibition of Hollywood films became a constant flow of political and consumerist messaging, selling American ideas, products, and power, especially during fractious eras. Melnick demonstrates that while Hollywood’s marketing of luxury and consumption often struck a chord with local audiences, it was also frequently tone-deaf to new social, cultural, racial, and political movements. He argues that the story of Hollywood’s global cinemas is not a simple narrative of cultural and industrial indoctrination and colonization. Instead, it is one of negotiation, booms and busts, successes and failures, adoptions and rejections, and a precursor to later conflicts over the spread of American consumer culture. A truly global account, Hollywood’s Embassies shows how the entanglement of worldwide movie theaters with American empire offers a new way of understanding film history and the history of U.S. soft power.