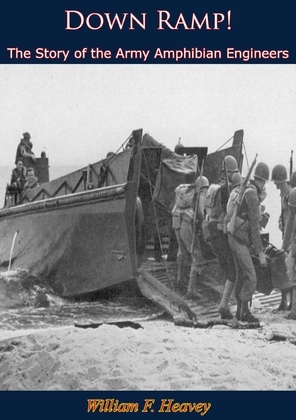 This is the story of the U.S. Army Amphibian Engineers, which saw significant (and dangerous) action both in the European and Pacific theaters during World War II. They were charged with the organization and supervision of crossing and landing parties, forming beachheads for invading troops. Efficient and courageous, they quickly became key elements in the Allies' fight to gain ground and maintain supply lines. These soldiers were frontline heroes, even if they didn't always make the front-page headlines. Down Ramp! keeps the memory of their history and brave service alive.-Print ed.

Landing an army on a hostile shore has long been regarded as one of the most difficult of all tactical operations. Even if the expanse of water to be crossed is only a river and not an ocean, history has proved the danger and costliness of such operations.

Yet we entered World War II with stretches of water varying from the 50-mile turbulent English Channel to the 5,000-mile expanse of the Pacific separating us from our mortal enemies. We had to cross these waters and make successful landings on enemy-held shores to get at our enemies. To all military students except a few extremists it was obvious that we would never win until our infantry crossed those waters to crush the enemy’s heart. Air attacks without an atomic bomb or a naval blockade, no matter how stringent, could never do that alone.