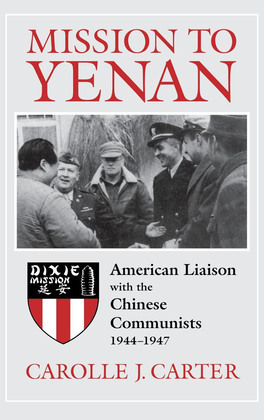 Conventional wisdom informs us that "only Nixon could go to China." In fact, in 1944, nearly thirty years before his historic trip, the American military established the first liaison and intelligence-gathering mission with the Chinese Communists in Yenan. Commonly referred to as the Dixie Mission, the detached military unit sent to Yenan was responsible for transmitting weather information, assisting the Communists in their rescue of downed American flyers, and laying the groundwork for an eventual rapprochement between the Communists and Nationalists, the two sides struggling in the ongoing Chinese Civil War.

Following extensive use of archival sources and numerous interviews with the men who traveled and served in Yenan, Carolle Carter argues that while Dixie fulfilled its assignment, the members steered the mission in different directions from its original, albeit loosely described, intent. As the months and years passed, the Dixie Mission increasingly emphasized intelligence gathering over evaluating their Communist hosts' contribution to the war effort against Japan.

Some American politicians in the 1950s portrayed the participants in the Dixie Mission as too sympathetic to the Chinese Communists. But during the 1970s many looked back at these individuals as wise but ignored oracles who could have prevented the "loss of China." Carter strips away these simplistic portrayals to reveal a diverse and dedicated collection of soldiers, diplomats, and technicians who had ongoing contact with the Chinese Communists longer than any other group during World War II, but who were destined to be a largely unused resource during the Cold War.