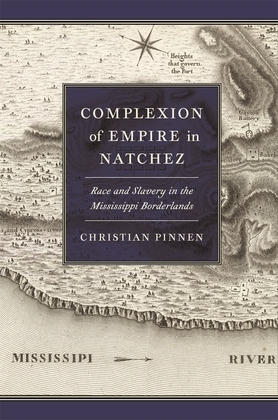 Complexion of Empire in Natchez

In Complexion of Empire in Natchez, Christian Pinnen examines slavery in the colonial South, using a variety of legal records and archival documents to investigate how bound labor contributed to the establishment and subsequent control of imperial outposts in colonial North America. He examines the dynamic and multifaceted development of slavery in the colonial South and reconstructs the relationships among aspiring enslavers, natives, struggling colonial administrators, and African laborers, as well as the links between slavery and the westward expansion of the American Republic.

By placing Natchez at the focal point, this book reveals the unexplored tensions among the enslaved, enslavers, and empires across the plantation complex. Most important, Complexion of Empire in Natchez highlights the effect that different conceptions of racial complexions had on the establishment of plantations and how competing ideas about race strongly influenced the governance of plantation colonies.

The location of the Natchez District enables a unique study of British, Spanish, and American legal systems, how enslaved people and natives navigated them, and the consequences of imperial shifts in a small liminal space. The differing—and competing—conceptions of racial complexion in the lower Mississippi Valley would strongly influence the governance of plantation colonies and the hierarchies of race in colonial Natchez. Complexion of Empire in Natchez thus broadens the historical discourse on slavery’s development by including the lower Mississippi Valley as a site of inquiry.