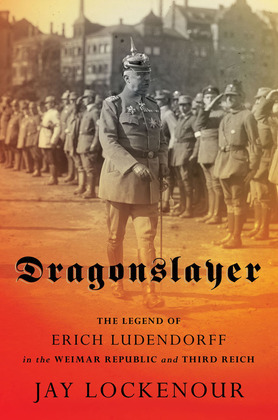 In this fascinating biography of the infamous ideologue Erich Ludendorff, Jay Lockenour complicates the classic depiction of this German World War I hero.

Erich Ludendorff created for himself a persona that secured his place as one of the most prominent (and despicable) Germans of the twentieth century. With boundless energy and an obsession with detail, Ludendorff ascended to power and solidified a stable, public position among Germany's most influential. Between 1914 and his death in 1937, he was a war hero, a dictator, a right-wing activist, a failed putschist, a presidential candidate, a publisher, and a would-be prophet. He guided Germany's effort in the Great War between 1916 and 1918 and, importantly, set the tone for a politics of victimhood and revenge in the postwar era.

Dragonslayer explores Ludendorff's life after 1918, arguing that the strange or unhinged personal traits most historians attribute to mental collapse were, in fact, integral to Ludendorff's political strategy. Lockenour asserts that Ludendorff patterned himself, sometimes consciously and sometimes unconsciously, on the dragonslayer of Germanic mythology, Siegfried—hero of the epic poem The Niebelungenlied and much admired by German nationalists. The symbolic power of this myth allowed Ludendorff to embody many Germans' fantasies of revenge after their defeat in 1918, keeping him relevant to political discourse despite his failure to hold high office or cultivate a mass following after World War I.

Lockenour reveals the influence that Ludendorff's postwar career had on Germany's political culture and radical right during this tumultuous era. Dragonslayer is a tale as fabulist as fiction.