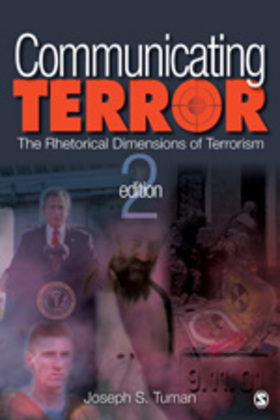 "This is an excellent text in furthering our understanding of the web of language and how it creates our mediated realities – which reflect our culture, politics, religion, economics, etc. Students really like the case studies and how it complements the theory and practice of rhetoric. I think this book has applications for almost any course in communication."
—J. Gregory Payne, Emerson College

Author Joseph S. Tuman uses fascinating case studies and examples as he explores both dissent terrorism and state terror and looks at terrorism from a communicative perspective. Presenting terrorism as a process of communication between terrorists and multiple audiences, this book examines a range of rhetorical components, including definitions and labels, symbolism in terrorism, the relationship between terror and the media, and public oratory about terrorism—by both victims of terrorism and terrorists themselves.

New to the Second Edition