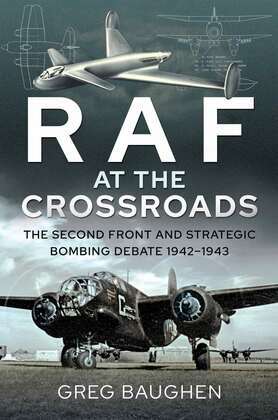 RAF at the Crossroads

The events of 1942 marked a pivotal year in the history of British air power. For more than two decades the theory that long-range bombing could win wars had dominated British defense policy. The vast majority of warplanes ordered for the RAF were designed either to bomb enemy cities or stop the enemy from bombing British cites. Conventional armies and the air forces that supported them were seen as an outmoded way of waging war.

During 1941 evidence began to mount that British policy was wrong. It had become clear the RAF’s bomber offensive against Germany had, until that point, achieved very little. Meanwhile, the wars raging in Europe, Africa and Asia were being decided not by heavy bombers, but by armies and their supporting tactical air forces. Britain had never had the resources to build a large army as well as a strategic bomber fleet; it had always had to make a choice. Now it seemed the country might have made the wrong choice.

For the first time since 1918 Britain began thinking seriously about a different way of fighting wars. Was it too late to change? Was a strategic bombing campaign the only option open to Britain? Could the United Kingdom help its Soviet ally more by invading France as Stalin so vehemently demanded? Could this be done in 1942?

Looking further ahead, was it time to begin the development of an entirely new generation of warplanes to support the Army? Should the RAF have specialist ground attack aircraft and air superiority fighters?

The answers to these questions, which are all explored here by aviation historian Greg Baughen, would help shape the development of British air power for decades to come.