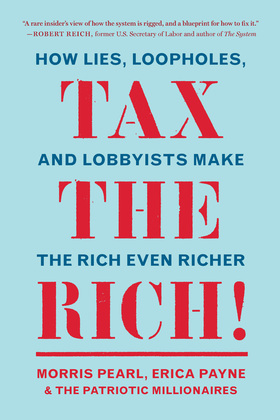 A powerfully persuasive and thoroughly entertaining guide to the most effective way to un-rig the economy and fix inequality, from America’s wealthiest “class traitors”

Most American people believe the economy is rigged against them. And they’re right. So how do you “un-rig” the economy? You start with the tax code.

In 2017, Republican lawmakers rewrote the entire federal tax code, deliberately and permanently rigging the economy against working people in favor of the political donor class.

In Tax the Rich! Morris Pearl, the millionaire chair of the Patriotic Millionaires, and Erica Payne, the organization’s founder, take readers on an insider’s tour of the nation’s tax code and show how the rich (and the politicians they control) structured the tax code to make themselves even richer. They explain how to un-rig the economy through the tax code to reverse America’s ever-growing and dangerously destabilizing concentration of wealth and power.

Conversational and punchy chapters such as “Their Money vs. Your Sweat,” “Economic Jenga,” and “When a Dollar Is Not Actually a Dollar,” feature charts, infographics, cartoons, and sidebars. They show exactly how we should tax wealthy individuals and corporations, focusing on existing mechanisms like marginal income tax and capital gains, loopholes to eliminate, and new methods of taxation, such as a wealth tax, that could be used to achieve a fairer system.

A final section debunks common tax myths, offering crucial information to push back against Fox News and opponents on the right. In the wake of the economic devastation of COVID-19, never have the arguments in this book been more timely—or more critical. And who better to pull back the curtain on all the ways that the wealthy avoid paying taxes, and deprive the state of essential resources, than the rich themselves?