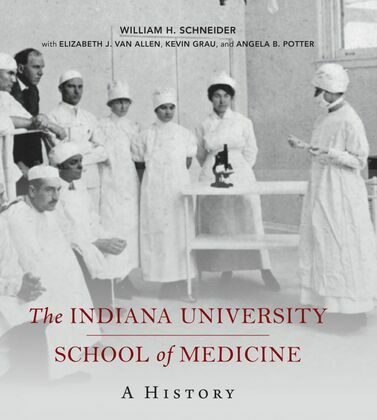 The Indiana University School of Medicine

The Indiana University School of Medicine: A History tells the story of the school and its faculty and students in fascinating detail. Founded in the early 20th century, the Indiana University School of Medicine went on to become a leading medical facility, preparing students for careers in medicine and providing healthcare across Indiana. Historian William Schneider draws on a treasure trove of historical images and documents, to recount how the school began life as the Medical Department in 1903, and later became the Indiana University School of Medicine, which was established as a full four-year school after merging with two private schools in 1908. Thanks to state support and local philanthropy, it quickly added new hospitals, which by the 1920s made it the core of a medical center for the city of Indianapolis and the only medical school in the state.

From modest beginnings, and the challenges of the Great Depression and the Second World War, the medical school has grown to meet the demands of every generation, becoming the leading resource for not only the education of physicians and for the conducting of medical research but also for the care and treatment of patients at the multi-hospital medical center. Today, the school boasts an annual income of over $1.5 billion, with over 2,000 full-time faculty teaching 1,350 MD students, and over $250 million in external research funding.