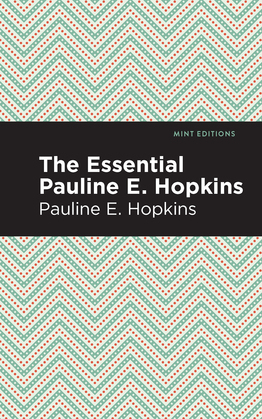 The Essential Pauline E. Hopkins (2021) compiles several iconic works of fiction by a pioneering figure in American literature. Contending Forces was Hopkins? first major publication as a leading African American author of the early twentieth century. Originally published in The Colored American Magazine, America?s first monthly periodical covering African American arts and culture, Winona: A Tale of Negro Life in the South and Southwest is a groundbreaking novel that addresses themes of race and colonization from the perspective of a young girl of mixed descent. Hagar?s Daughter: A Story of Southern Caste Prejudice is thought to be the first detective novel written by an African American author. Also included in this collection is ?Talma Gordon,? an influential short story, and Of One Blood, Hopkins? final novel.

Winona: A Tale of Negro Life in the South and Southwest opens on an island in the middle of Lake Erie, where White Eagle?recently displaced after the dissolution of the Buffalo Creek reservation?has built a home for himself and his African American wife. Adopting her son Judah, White Eagle establishes a life for his family apart from the prejudices and violence of American life. Their daughter Winona grows to be proud of her rich cultural heritage. Set just before the outbreak of the American Civil War, Hagar?s Daughter: A Story of Southern Caste Prejudice takes place on the outskirts of Baltimore. When Hagar Sargeant returns home after four years of study at a seminary in the North, she meets Ellis Enson, an older gentleman and self-made man who resides at the stately Enson Hall. After a brief courtship, the pair are engaged to be married. As the wedding approaches, Hagar?s mother dies unexpectedly, leaving Hagar the family estate. When a man from the deep south arrives claiming the young woman was born a slave, their lives are changed forever. Contending Forces is the story of Charles Montfort, a planter from Bermuda who moves with his family and slaves to North Carolina. There, he plans to free his slaves, drawing condemnation from his neighbors and risking violent retaliation. When a rumor spreads regarding his wife?s ancestry, Montfort suspects Anson Pollack, a former friend, of planning to dispossess him. In these wide-ranging tales of race, class, and social convention, Hopkins proves herself as a true pioneer of American literature, a woman whose talent and principles afforded her the vision necessary for illuminating the injustices of life in a nation founded on slavery and genocide.

With a beautifully designed cover and professionally typeset manuscript, this edition of The Essential Pauline E. Hopkins is a classic work of African American literature reimagined for modern readers.