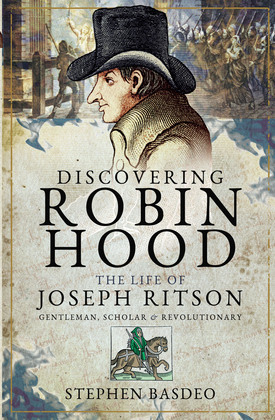 The name of Joseph Ritson, born in Stockton-on-Tees in 1752, will be familiar to very few people. The name of Robin Hood is known the world over. Yet it was Ritson whose research in the late eighteenth century ensured the survival of the Robin Hood legend. He traveled all over the country looking for ancient manuscripts which told of the life and deeds of England’s most famous outlaw. Without his efforts, the legend of Robin Hood might have gone the way of other medieval outlaws such as Adam Bell — famous in their day but not so much now.

Yet this is not only a story about the formation of the Robin Hood legend. Ritson’s story is one of rags to riches. Born in humble circumstances, his aptitude for learning meant that he rose through society’s ranks and became a successful lawyer, local official, and a gentleman.

However, underneath the genteel and bourgeois façade of Joseph Ritson, Esq. was a revolutionary: having traveled to Paris at the height of the French Revolution, he was captivated by the revolutionaries’ ideology of liberté, egalité, fraternité. He returned to England as a true democrat who sought the abolition of the British monarchy and the ‘rotten’ parliamentary system and wished for French Revolution and its reign of terror to spread over to England.

This the history of the life and times of Joseph Ritson: gentleman, scholar, and revolutionary.