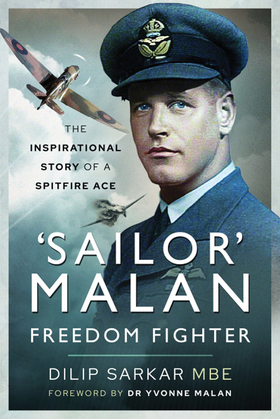 Adolph Gysbert Malan was born in Wellington, South Africa. A natural leader and driven individual with a totally positive outlook, aged fourteen Malan became an officer cadet in the South African Merchant Navy, before being commissioned into the Royal Navy Reserve. Well-travelled and worldly-wise, aged twenty-five the intrepid adventurer applied for a Short Service Commission in the RAF. Universally known as ‘Sailor’ in the RAF, Malan became a fighter pilot.

Shortly after war was declared, Malan was involved in the infamous ‘Battle of Barking Creek’, in which 74 Squadron mistakenly destroyed friendly Hurricanes. Then, over Dunkirk in May 1940, Malan’s exceptional ability was immediately demonstrated in combat and a string of confirmed aerial victories rapidly accumulated. The following month, Malan scored the Spitfire’s first nocturnal kill. By August 1940 he was commanding 74 Squadron, which he led with great distinction during the Battle of Britain.

In March 1941, Malan was promoted and became the first Wing Commander (Flying) at Biggin Hill, leading the three-squadron-strong Spitfire wing during operations over northern France. After a break from operations, Malan went on to command a succession of fighter training units, passing on his tactical genius and experience, and producing his famous ‘Ten Rules of Air Fighting’ which are still cited today. By the war’s end, Group Captain Malan was the RAF’s tenth top-scoring fighter pilot.

Leaving the RAF in 1945 and returning to South Africa, he was disgusted by Apartheid and founded the ‘Torch Commando’ of ex-servicemen against this appalling racist policy. This part of Malan’s life is equally as inspirational, in fact, as his wartime service, and actually tells us more about the man than just his RAF record. Tragically, in 1963, he died, prematurely, aged just fifty-three, of Parkinson’s. Written with the support of the Malan family, this biography is the full story of a remarkable airman and politician.