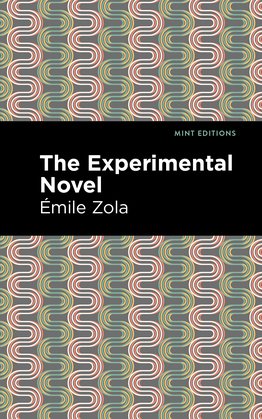 The Experimental Novel (1880) is an essay by French author Émile Zola. Written at the height of his career as a leading proponent of Naturalism, The Experimental Novel serves to illuminate the author’s approach to the practice and purpose of writing while advocating for a revolution of style among artists of his era. Read as a reaction against Romanticism, The Experimental Novel proves a convincing counterpoint to the excesses and failures of nineteenth century art, illustrating the need for literature to draw inspiration from other sources of human understanding—such as science, history, and the social sciences—in order to effectively explore the themes of everyday life. “The return to nature, the naturalistic evolution which marks the century, drives little by little all the manifestation of human intelligence into the same scientific path. Only the idea of a literature governed by science is doubtless a surprise, until explained with precision and understood. It seems to me necessary, then, to say briefly and to the point what I understand by the experimental novel.” Rather than imitate reality, a writer must attempt a scientific investigation of the nature of everyday life. For Zola, plot must be secondary to character, and character must be subject to the laws and limitations of a particular society. As a writer interested in the relationships between rich and poor, citizen and state, culture and economy, and personal and public life, Zola found it necessary to write experimental fiction—literally, fiction which experiments with its object of inquiry. Blending science and art, he revolutionized not only the idea of what a novel is and can do, but the responsibility of the artist to society. The Experimental Novel is a masterful essay for readers interested in Zola’s work and in the history and philosophy of literature. With a beautifully designed cover and professionally typeset manuscript, this edition of Émile Zola’s The Experimental Novel is a classic work of French literature reimagined for modern readers.