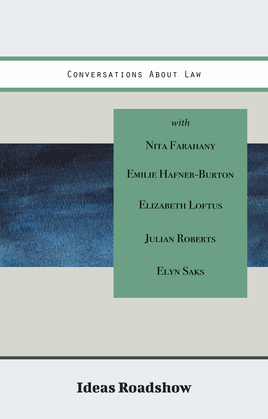 Conversations About Law includes the following 5 carefully-edited Ideas Roadshow Conversations featuring leading researchers. This collection includes a detailed preface highlighting the connections between the different books. Each book is broken into chapters with a detailed introduction and questions for discussion at the end of each chapter:1. Neurolaw - A Conversation with Nita Farahany, Robert O. Everett Distinguished Professor of Law and Professor of Philosophy at Duke University. Nita Farahany is a leading scholar on the ethical, legal, and social implications of emerging technologies. This wide-ranging conversation examines the growing impact of modern neuroscience on the law, deepening our understanding of a wide range of issues, from legal responsibility to the American Constitution’s Fifth Amendment privilege against self-incrimination.2. Improving Human Rights - A Conversation with Emilie Hafner-Burton, the John D. and Catherine T. MacArthur Professor of International Justice and Human Rights at UC San Diego. This extensive conversation covers a wide range of topics, including international law, when and why international laws work and don’t work, the international human rights system and concrete measures that could be taken to improve it, the International Criminal Court, and the role of states in the protection of human rights.3. The Malleability of Memory - A Conversation with Elizabeth Loftus, a world-renowned expert on human memory and Distinguished Professor of Psychological Science; Criminology, Law, and Society; Cognitive Science and Law at UC Irvine. This in-depth conversation covers her ground-breaking work on the misinformation effect, false memories and her battles with “repressed memory” advocates, the introduction of expert memory testimony into legal proceedings and the effect of DNA evidence on convincing judges of the problematic nature of eyewitness testimony. 4. Criminal Justice: An Examination - A Conversation with Julian Roberts, Professor of Criminology at the University of Oxford. Julian Roberts is an international expert on sentencing throughout the common-law world and is strongly involved in connecting scholars with practitioners as well as promoting greater public understanding of sentencing. This thought-provoking conversation covers a wide range of topics related to criminal justice, including plea bargaining, the involvement of victims in criminal sentencing procedures, victim impact statements, parole, sentencing multiple and repeat crimes, community-based sentencing, alternate dispute resolution, rehabilitation, and more.5. Mental Health: Policies, Laws and Attitudes - A Conversation with Elyn Saks, Orrin B. Evans Distinguished Professor of Law, and Professor of Law, Psychology and Psychiatry and the Behavioral Sciences at USC. During this wide-ranging conversation Elyn Saks candidly shares her personal experiences with schizophrenia and discusses the intersection of law, mental health and ethics: the legal and ethical implications surrounding mental health. Further topics include psychotropic medication and the law, criminalization and mental illness, and an exploration of which countries are more progressive with respect to important mental health policies, laws and procedures, and more.Howard Burton is the founder and host of all Ideas Roadshow Conversations and was the Founding Executive Director of Perimeter Institute for Theoretical Physics. He holds a PhD in theoretical physics and an MA in philosophy.