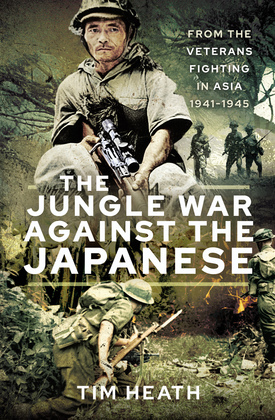 The Jungle War Against the Japanese

The jungle war against the Japanese was arguably one of the worst terrors that could be inflicted upon a young soldier who had never been away from home before, let alone be faced with a brutal, sadistic and uncompromising enemy in an alien environment.

Based on the accounts of three culturally different veterans, Tim Heath investigates the war against the Japanese, primarily in the jungles of Asia during the Second World War. From the first jungle forays, through to the defeats, the victories, the massacre of indigenous populations, the war crimes and the final elements of the war in the jungle which led to ultimate victory over the Japanese, this volume is a unique attempt at telling the story from a fresh perspective.

The way in which the individuals who have contributed to this volume speak might imply a sanitized view toward the act of killing in times of war. Yet to truly understand this mind-set one has to relive their experiences of that claustrophobic hell.

The book examines the factors which initially made the Japanese such brutally efficient exponents of warfare in jungle terrain, the natural hazards encountered in the jungle environment, the techniques that the British had to master in order to become at least equal to their enemy and what it was like to have to live and fight knowing your enemy was never far away from you. It was a war where methods and tactics had to be developed through hard experience along with strong leadership, which was initially lacking on the part of the British.

The rule became a simple one: the jungle is neutral. It favours neither friend nor foe. It favours only he who is prepared to adapt to it the best and utilize it to his best advantage. You cannot fight the jungle itself; if you do you will almost certainly die trying.