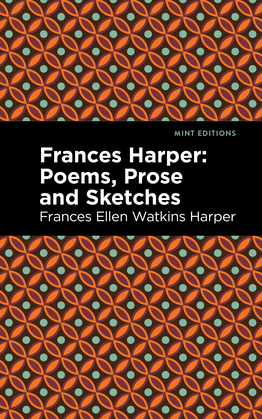 Frances Harper: Poems, Prose, and Sketches (2021) is a collection of writing by Frances Harper. Harper, the first African American woman to publish a novel, gained a reputation as a popular poet and impassioned abolitionist in the decades leading up to the American Civil War. Much of her work was rediscovered in the twentieth century and preserved for its significance to some of the leading social movements of the nineteenth century, including temperance, abolition, and women’s suffrage. As an artist for whom the personal was always political, Frances Harper served in a leadership role at the Women’s Christian Temperance Union and worked to establish the National Association of Colored Women, serving for a time as vice president of the organization. Included in this volume are extracts of her early poetry volumes, including Forest Leaves (1845) and Poems on Miscellaneous Subjects (1854). In “Bury Me in Free Land,” an influential poem published in an 1858 edition of abolitionist newspaper The Anti-Slavery Bugle, Harper expresses her commitment to the cause of freedom in life or death terms: “I ask no monument, proud and high, / To arrest the gaze of the passers-by; / All that my yearning spirit craves, / Is bury me not in a land of slaves.” She reflects on the theme of freedom throughout her body of work, often examining her own identity or experiences as a free Black woman alongside the lives of her enslaved countrymen. In “Free Work,” she looks to something as simple as her own clothing and examines its connection—or lack thereof—to the institution of slavery: “I wear an easy garment, / O’er it no toiling slave / Wept tears of hopeless anguish, / In his passage to the grave.” Reflecting on the horrors of slavery through the lens of the everyday, Harper refuses to take for granted the significance of freedom in all of its manifestations, a reality which is sometimes as simple as the clothes on her back. In these poems and speeches from across her lengthy career as an artist and activist, Harper not only dedicates herself to her suffering people, but imagines a time “When men of diverse sects and creeds / Are clasping hand in hand.” With a beautifully designed cover and professionally typeset manuscript, this edition of Frances Harper’s Frances Harper: Poems, Prose, and Sketches is a classic of African American literature reimagined for modern readers.