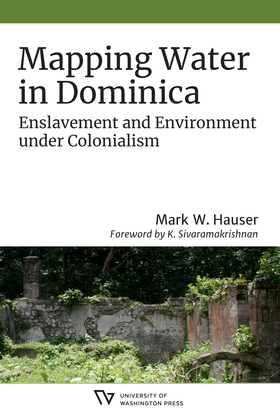 Dominica, a place once described as “Nature’s Island,” was rich in biodiversity and seemingly abundant water, but in the eighteenth century a brief, failed attempt by colonial administrators to replace cultivation of varied plant species with sugarcane caused widespread ecological and social disruption. Illustrating how deeply intertwined plantation slavery was with the environmental devastation it caused, Mapping Water in Dominica situates the social lives of eighteenth-century enslaved laborers in the natural history of two Dominican enclaves.

Mark Hauser draws on archaeological and archival history from Dominica to reconstruct the changing ways that enslaved people interacted with water and exposes crucial pieces of Dominica’s colonial history that have been omitted from official documents. The archaeological record—which preserves traces of slave households, waterways, boiling houses, mills, and vessels for storing water—reveals changes in political authority and in how social relations were mediated through the environment. Plantation monoculture, which depended on both slavery and an abundant supply of water, worked through the environment to create predicaments around scarcity, mobility, and belonging whose resolution was a matter of life and death. In following the vestiges of these struggles, this investigation documents a valuable example of an environmental challenge centered around insufficient water.

Mapping Water in Dominica is available in an open access edition through the Sustainable History Monograph Pilot, thanks to the generous support of the Andrew W. Mellon Foundation and Northwestern University Libraries.