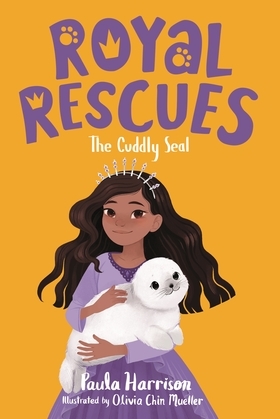 Paula Harrison's Royal Rescues #5: The Cuddly Seal, illustrated by Olivia Chin Mueller, is the fifth book in this sweet illustrated chapter book series about a pet-loving princess who finds and helps animals in trouble—even if it's against the rules!

"A royal palace is no place for pets, Beatrice!" says her father, King George.

But Princess Bea won’t let royal rules stop her from helping animals in need. While exploring Silver Rock Bay, Bea finds a little seal pup alone on some rocks. Can she and her friend Keira reunite the baby seal with its mother before the big storm comes?