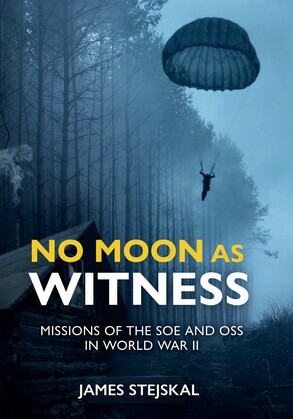 No Moon as Witness

Complete with rare photographs, diagrams and glossary, follow author James Stejskal as he covers the establishment of these agencies and their intense training regimens leading into World War II.

The SOE’s notable successes included the destruction of a power station in France, the assassination of Himmler’s deputy Reinhard Heyrich, and ending the Nazi atomic bomb program by destroying the heavy water plant at Vemork, Norway. OSS operatives established anti-Nazi resistance groups across Europe, and managed to smuggle operatives into Nazi Germany, including running one of the war's most important spies, German diplomat Fritz Kolbe.

All of their missions were incredibly dangerous and many agents were captured, tortured, and ultimately killed – the life expectancy of an SOE wireless operator in occupied France was just six weeks.

In No Moon as Witness, historian James Stejskal examines why these agencies were established, the training regime and ingenious tools developed to enable agents to undertake their missions, their operational successes, and their legacy.