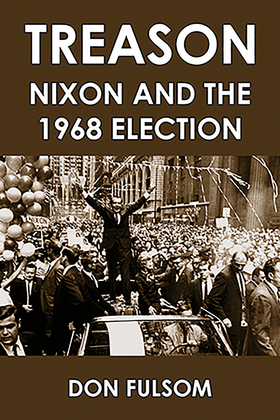 When do powerful politicians go too far? With freshly released evidence and a keen insider's eye, former White House reporter Don Fulsom delves into Richard M. Nixon's greatest crime: his sabotage of the peace talks with Vietnam to curry favor with the American public. Upon learning of Nixon's actions, outgoing president Lyndon B. Johnson angrily stated, "This is treason!" Fulsom delves into the enormity of Nixon's betrayal and its repercussions-all the way through Watergate. He examines the motives of each of the major players in the context of the powerful forces of history and international politics. This insightful title reveals how very little the public actually knew about the schemes of "Tricky Dick."

In the summer of 1968, President Johnson was close to securing peace talks with the South Vietnamese president, and public support swung towards Johnson-backed Democratic candidate Hubert Humphries. Nixon, who had campaigned on the promise of a secret plan to bring a swift end to the Vietnam War, knew that he would never win the election if Johnson secured a peace. Nixon made false promises to the Vietnamese, who subsequently pulled out of Johnson's talks. The announcement came the weekend before the presidential election, and public support carried Nixon to a razor-thin victory. The prolonged war cost tens of thousands of lives and lasted many more years before its resolution.