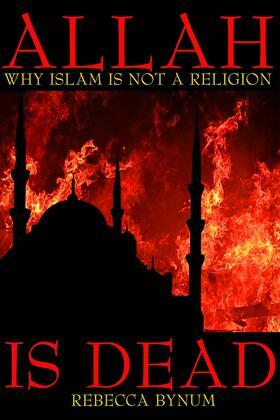 Many analysts have worked on the problem of Islam's political aspects, but few have tackled Islam philosophically as a whole. Rebecca Bynum does that. She discusses Islam and its status in the modern world with a depth and precision missing in many modern accounts and sadly concludes that the great hope of secularizing the Muslim world is a pipe dream. It is much more likely, according to Bynum, that the secular world will be Islamized. Overall, however, her analysis is hopeful and provides an important ideological tool for dealing with Islam which is to reconsider its classification. Bynum maintains Islam's current status as a religion, along with all the other religions of the world, is in error. She refers to Islam as the duck-billed platypus of belief systems and proposes it should be classified accordingly; as the hybrid religio-socio-political belief system it is. She also reminds the Western world about what religion itself actually is, not the caricature modern analysts often mean when they refer to "religious fundamentalisms." Bynum has given policy-makers a powerful tool for dealing with Islam. Let us hope they understand, and grasp, and choose to make use of it.