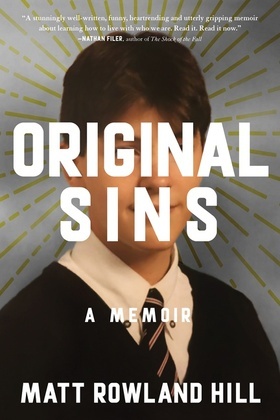 A Memoir
by Matt Rowland Hill (Author)
Excerpt
Nonfiction Biography & autobiography Personal memoirs
warning_amber
One or more licenses for this book have been acquired by your organisation details
EPUB
26 loans, One at a time
Details

There have been two great loves in Matt Rowland Hill’s life so far: Jesus and heroin. Hill grew up the son of a minister in a strict Baptist church. After a crisis of loss of faith, he obsessively turned to literature before becoming addicted to crack and heroin in his early twenties. Hill’s addiction stretched over a decade, culminating in a suicide attempt and weeks in a secure psychiatric unit. After undergoing rehabilitation, which forced him to confront the religion he had spent his whole life running from, he finally got clean.

Original Sins is an extraordinary memoir of faith, family, loss, shame and addiction, but ultimately it is about survival, growing up and learning to live. Recklessly honest, it’s as hilarious as it is grave, courageous and compulsive. It has echoes of Irvine Welsh’s Trainspotting, Jeanette Winterson’s Oranges Are Not the Only Fruit and Tara Westover’s Educated, but it is firmly its own very special thing, too.