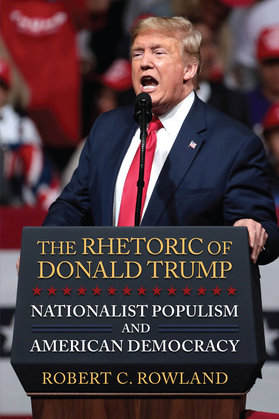 The Rhetoric of Donald Trump

The Rhetoric of Donald Trump identifies and analyzes the nationalist and populist themes that dominate the rhetoric of President Trump and links those themes to a persona that has evolved from celebrity outsider to presidential strongman. In the process Robert C. Rowland explains how the nationalist populism and strongman persona in turn demands a vernacular rhetorical style unlike any previous modern president—a style that makes no attempt to lay out a case, requires constant lies, and breaks every norm for how a presidential candidate or president should talk. In stark contrast, our most effective presidents have used rhetoric to present a positive vision of what the nation could achieve. The three most effective presidential uses of rhetoric in the past century—FDR, Reagan, and Obama—all presented a coherent ideological message that, while focused on problems of the moment, was also rooted in a fundamental optimism. In contrast, Trumpâ€™s message is fundamentally negative.

The Rhetoric of Donald Trump explores how the nation could so abruptly shift from a president such as Barack Obama, who emphasized the audacity of hope, to one who in his inaugural address spoke about “American carnage.” At its core Trump’s message is well designed to appeal to voters with an authoritarian personality structure, especially in the white working-class, who feel threatened by the pace of societal change, especially demographic change. Rowland’s work illustrates how President Trump’s ceremonial speeches violate norms calling for a message of national unity and instead present a divisive message designed to create strongly negative emotions, especially fear and hate. It further reveals how Trump sustains those strong visceral reactions with his use of Twitter to make the rally atmosphere a daily reality for his supporters, a prime example being the Coronavirus Task Force briefings which he transformed from an exercise in desperately needed public health education into a partisan rally.

The Rhetoric of Donald Trump is essential reading for scholars, students, and the informed citizen to understand how Trump’s rhetoric of nationalist populism with a strongman persona undermines basic principles at the heart of American democracy.