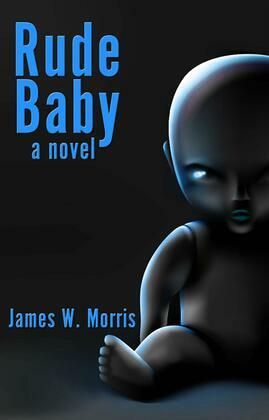 In the near future, a woman named Lucinda enters a supermarket. Once inside, she realizes three things: first, the supermarket is big, preposterously, surreally big; second, there is no apparent way to check out; third, the produce department is selling human babies, extra-large genetically-manipulated newborns into which the store has downloaded-as an extra customer service feature-basic information about the world, enabling just-purchased tykes to walk and talk. But Lucinda's new baby is not sweet and cuddly; he's rude and snarky, refusing to play nice until she can prove to him growing up will be worth the effort. While Lucinda is attempting to return the brat to customer service, he escapes the shopping cart and determines to explore the vast store on his own and find the meaning of life. Is true wisdom to be found in Canned Goods? How about Frozen Foods? And who is the man with the sword? Why is he covered in blood?

James W. Morris is a graduate of LaSalle University in Philadelphia, where he was awarded a scholarship for creative writing. He has published dozens of short stories, humor pieces, essays, and poems in various literary magazines, including PHILADELPHIA STORIES and ZAHIR, and worked for a time as a joke writer for Jay Leno.