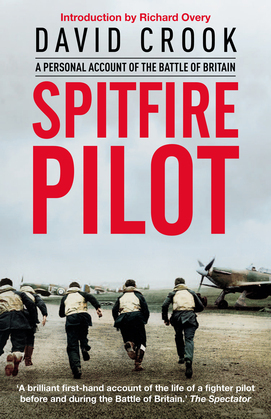 Spitfire Pilot is the exhilarating and moving memoir of D. M. Crook, an airman in the legendary 609 Squadron - one of the most successful RAF units in the Battle of Britain.

Beginning with his fond recollections of his halcyon days in training - acrobatics, night flying and languorous days spent playing sport and nights off visiting Piccadilly Circus - Crook goes on to recount in thrilling detail the dogfights, remarkable victories and tragic losses which formed the daily routine of Britain's heroic aerial defenders in that long summer of 1940.

Often hopelessly outnumbered, the men of 609 Squadron in their state-of-the-art Spitfires committed acts of unimaginable bravery against the Messerschmitts and Junkers of Germany's formidable Luftwaffe. Many of Crook's fellow airmen did not make it back alive, and the absence they leave in the close-knit community of the squadron is described with great poignancy.

Spitfire Pilot offers a unique and personal insight into one of the most critical moments of British history, when a handful of men stood up against the might of the German Air Force in defence of their country.

This definitive edition, the first for more than sixty years, includes a new foreword by David Crook's daughter and Air Vice Marshal Sandy Hunter, Honorary Air Commodore of the 609 Squadron. The book also has an introduction by Professor Richard Overy.