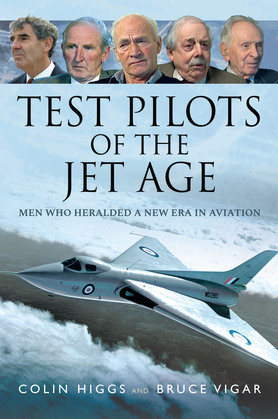 Test Pilots of the Jet Age

Today, as we board our flights to Adelaide, Zurich, and all points in between, we give little thought to the jet power that will take us there. But, this is only possible because just over 70 years ago a select band of British test pilots was prepared to risk all in the quest to fly further, faster, and higher than ever before. Their quest was fraught with danger; disaster and death were never far away.

This book captures eleven of those stories as told by the pilots themselves – their words as to how they took British aviation to the forefront of a new era, the ‘Jet Age’. Britain’s aircraft industry was booming in the years immediately after the end of the Second World War and the demand for test pilots seemingly limitless as new aircraft types rolled off the drawing boards. Meteors, Vampires, Hunters, Comets, Victors, Vulcans and Harriers were some of the aircraft that became world-beaters. Today, these names and the role played by the test pilots in bringing these projects to fruition are all but forgotten.

The stories were filmed over a number of years and it is the edited transcripts of those interviews that form a unique and rare perspective on such a pivotal era in aviation. Most were veterans of the Second World War with illustrious service records. Now they faced new battles as they flew new airframes and engines to the limit and sometimes beyond. First, they had to conquer the ‘sound barrier’ which to many, scientists and the public alike, had assumed almost mythic status. Having done that, they were soon flying at twice the speed of sound, such was the rate of progress. It took discipline, technical know-how, an above average level of flying skill and according to some, a lack of imagination to make a good test pilot. Their stories are often insightful, always modest and often tinged with humor.