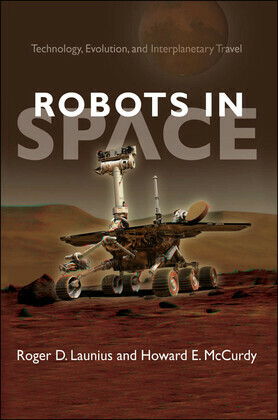 A look into the history of space exploration and its possible future, and just where exactly robotics fit into it all.

Given the near incomprehensible enormity of the universe, it appears almost inevitable that humankind will one day find a planet that appears to be much like the Earth. This discovery will no doubt reignite the lure of interplanetary travel. Will we be up to the task? And, given our limited resources, biological constraints, and the general hostility of space, what shape should we expect such expeditions to take?

In Robots in Space, Roger Launius and Howard McCurdy tackle these questions with rigorous scholarship and disciplined imagination, jumping comfortably among the worlds of rocketry, engineering, public policy, and science fantasy to expound upon the possibilities and improbabilities involved in trekking across the Milky Way and beyond. They survey the literature—fictional as well as academic studies—and outline the progress of space programs in the United States and other nations. They also assess the current state of affairs to offer a conclusion startling only to those who haven’t spent time with Asimov, Heinlein, and Clarke: to traverse the cosmos, humans must embrace and entwine themselves with advanced robotic technologies . . .

Praise for Robots in Space

“This short volume manages to capture the history of U.S. space flight, to explain the underpinnings of U.S. space policy and to plot out the possibilities for our future in space in a style that most anyone can enjoy.” —Andrew McMichael, Park City Daily News