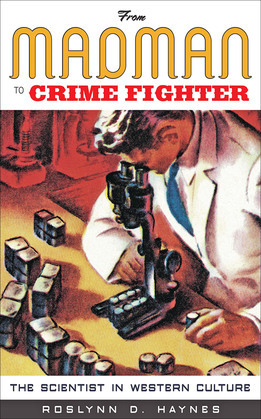 From Madman to Crime Fighter

A study of the scientist in Western culture, from medieval images of alchemists to present-day depictions of cyberpunks and genetic engineers.

They were mad, of course. Or evil. Or godless, amoral, arrogant, impersonal, and inhuman. At best, they were well intentioned but blind to the dangers of forces they barely controlled. They were Faust, Frankenstein, Jekyll, Moreau, Caligari, Strangelove—the scientists of film and fiction, cultural archetypes that reflected ancient fears of tampering with the unknown or unleashing the little-understood powers of nature.

In From Madman to Crime Fighter, Roslynn D. Haynes analyzes stereotypical characters—including the mad scientist, the cold-blooded pursuer of knowledge, the intrepid pathbreaker, and the bumbling fool—that, from medieval times to the present day, have been used to depict the scientist in Western literature and film. She also describes more realistically drawn scientists, characters who are conscious of their public responsibility to expose dangers from pollution and climate change yet fearful of being accused of lacking evidence.

Drawing on examples from Britain, America, Germany, France, Russia, and elsewhere, Haynes explores the persistent folklore of mad doctors of science and its relation to popular fears of a depersonalized, male-dominated, and socially irresponsible pursuit of knowledge for its own sake. She concludes that today’s public response to science and scientists—much of it negative—is best understood by recognizing the importance of such cultural archetypes and their significance as myth. From Madman to Crime Fighter is the most comprehensive study of the image of the scientist in Western literature and film.