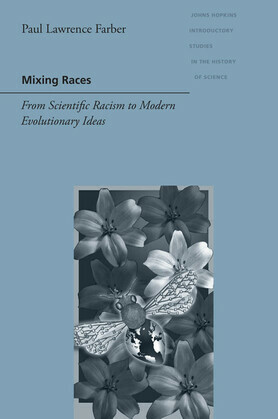 “Traces both historically and sociologically the changing attitudes on race-mixing (miscegenation) in western culture . . . clear, well written and useful.” —Journal of the History of Biology

This book explores changing American views of race mixing in the twentieth century, showing how new scientific ideas transformed accepted notions of race and how those ideas played out on college campuses in the 1960s.

In the 1930s it was not unusual for medical experts to caution against miscegenation, or race mixing, espousing the common opinion that it would produce biologically dysfunctional offspring. By the 1960s the scientific community roundly refuted this theory. Paul Lawrence Farber traces this revolutionary shift in scientific thought, explaining how developments in modern population biology, genetics, and anthropology proved that opposition to race mixing was a social prejudice with no justification in scientific knowledge.

In the 1960s, this new knowledge helped to change attitudes toward race and discrimination, especially among college students. Their embrace of social integration caused tension on campuses across the country. Students rebelled against administrative interference in their private lives, and university regulations against interracial dating became a flashpoint in the campus revolts that revolutionized American educational institutions.

Farber’s provocative study is a personal one, featuring interviews with mixed-race couples and stories from the author’s student years at the University of Pittsburgh. As such, Mixing Races offers a unique perspective on how contentious debates taking place on college campuses reflected radical shifts in race relations in the larger society.

“A fascinating look at how evolutionary science has changed alongside social beliefs.” —Midwest Book Review

“Will open the dialogue about social barriers and group identities . . . Essential.” —Choice