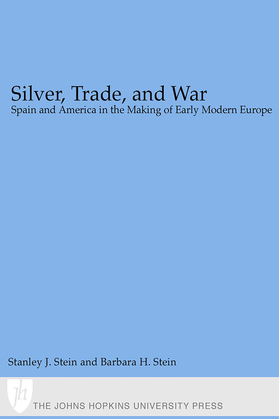 Spain and America in the Making of Early Modern Europe
by Stanley J. Stein (Author), Barbara H. Stein (Author)
Excerpt
Nonfiction Business & economics Commerce Economic history History Renaissance History by country Europe Spain
warning_amber
One or more licenses for this book have been acquired by your organisation details
EPUB
Unlimited loans, One at a time
Details

A look at the interaction of America, Spain, and Europe between 1500 and 1750, focusing on Spain’s role in Europe’s expansion across the Atlantic.

The 250 years covered by this book marked the era of commercial capitalism, bridging late medieval and modern times. In 1500, Spain brought American silver back home across the Atlantic in exchange for European goods. Spanish colonialism, the authors suggest, was the cutting edge of the early global economy. America’s silver enabled Spain to bring elements of capitalism into its late medieval society. However, the authors argue, silver gave Spain illusions of wealth, security, and dominance, while its system of “managed” transatlantic trade failed to monitor silver flows that were beyond government control. While Spain’s intervention reinforced Hapsburg efforts at hegemony in Europe, it also led to proto-nationalist state formations, notably in England and France. 1714’s Treaty of Utrecht emphasized the lag between developing England and France, and stagnating Spain, and the persistence of Spain’s late medieval structures. These were basic elements of what the authors term Spain’s Hapsburg “legacy.”

Over the first half of the eighteenth century, Spain under the Bourbons tried to contain expansionist France and England in the Caribbean and to create policies competitors seemed to apply successfully to their overseas possessions, namely, a colonial compact. Spain’s policy planners (proyectistas) scanned abroad for models of modernization adaptable to Spain and its American colonies without risking institutional change. The second part of the book analyzes the projectors’ works and their minimal impact on the changing Atlantic scene until 1759. By then, despite its efforts, Spain could no longer compete with England and France in the international economy.

Silver, Trade, and War is about markets, national rivalries, diplomacy, conflict, and the advancement or stagnation of states.