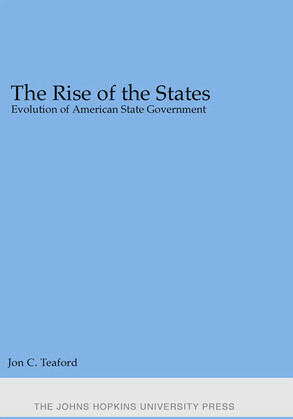 The Rise of the States

A noted historian explores the development of U.S. State governments from the end of the 19th century to the so-called renaissance of States in the 20th.

It is a common misperception that America’s state governments were lethargic backwaters before suddenly stirring to life in the 1980s. In The Rise of the States, Jon C. Teaford presents a very different picture. Teaford shows how state governments were continually adapting and expanding throughout the past century, assuming new responsibilities, developing new sources of revenue, and creating new institutions.

The Rise of the States examines the evolution of the structure, function, and finances of state government during the Progressive Era, the 1920s, the Great Depression, the post-World War II years, and into the 1960s. State governments not only played an active role in the creation, governance, and management of the political units that made up the state, but also in dealing with the growth of business, industries, and education. Different states chose different solutions to common problems, and this diversity of responses points to the growing vitality and maturity of state governments as the twentieth century unfolded.