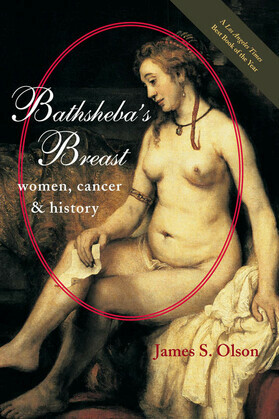 by James S. Olson (Author)
Excerpt
Nonfiction Medical History
EPUB
Unlimited loans, One at a time
Details
An absorbing and unsettling history of breast cancer told through the stories of women who have confronted it from ancient times to the present.

A Los Angeles Times Best Book of the Year

In 1967, an Italian surgeon touring Amsterdam’s Rijks museum stopped in front of Rembrandt’s Bathsheba at Her Bath and noticed an asymmetry to Bathsheba’s left breast; it seemed distended, swollen near the armpit, discolored, and marked with a distinctive pitting. The physician learned that Rembrandt’s model, Hendrickje Stoffels, later died after a long illness. He conjectured that the cause of her death was almost certainly breast cancer.

In Bathsheba’s Breast, James S. Olson traces the history of breast cancer through women’s experiences of the disease across epochs and continents. The stories range from the sixth-century Byzantine empress Theodora, who chose to die rather than lose her breast to Dr. Jerri Nielson, who was evacuated from the South Pole in 1999 after performing a biopsy on her own breast and self-administering chemotherapy.

Olson explores every facet of the disease: medicine’s evolving understanding of its pathology and treatment options; its cultural significance; the political and economic logic that has dictated the terms of a war on a “woman’s disease”; and the rise of patient activism.