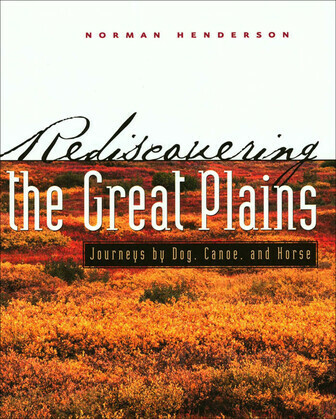 The North American Plains are one of the world’s great landscapes—but today, the most intimate experience most of us are likely to have of the great grasslands is from behind the window of a car or train. It was not always so. In the earliest days, Plains Indians traveled on foot across the vastness, with only the fierce, wolflike Plains dogs as companions. Later, with the arrival of Europeans, horses and canoes appeared on the Plains. In this book, Norman Henderson, a leading scholar of the world’s great temperate grasslands, revives these traditional modes of travel, journeying along 200 miles of Canada’s Qu’Appelle River valley by dog and travois (the wooden rack pulled by dogs and horses used by Native Americans to transport goods), then by canoe, and finally by horse and travois.

Henderson interweaves his own adventures with the exploits of earlier Plains travelers, like Lewis and Clark, Francisco Coronado, La Vérendrye, and Alexander Henry. Lesser-known experiences of the fur traders and others who struggled to cross this strange and forbidding landscape also illuminate the story, while Henderson’s often humorous description of his attempts to find and train old Plains breeds of dogs and horses highlight the difficulties involved in recreating archaic travel methods. He also draws on the history of the world’s other great temperate grasslands: the South American pampas and the Eurasian steppes. Recalling the work of Ian Frazier and Jonathan Raban, Henderson’s account offers a deeper understanding of the natural and human history of the North American Plains.

“A captivating ‘biography of a landscape,’ its good humor blended with impressive scholarship, including snappy thumbnail histories of canoes, horses, dogs, barbed wire and those pesky blood-sucking mosquitoes.” —Publishers Weekly